Written and performed by Mark Hughes | Vancouver BC

LUB DUB is what you make it. Sketch show meets performance-art meets ask-me-anything. An experiment in creating inclusive spaces, and a forum for discussions of racism, decolonization, gender, disability, and class.

Buy Tickets at in advance for LUB DUB at EventBrite

“If we can’t be young, at least we can be immature.”

An immature show about “Maturation” and beyond. Mindless middle-age musings as thick as a delinquent chin hair: Swingers parties, obituaries, sex, Gwyneth Paltrow (damn her), and more. And, tips. Definitely tips. Irreverent humour with a smidgen of melancholy. (No seniors or uteruses were harmed in the making of this show.) Winner of the 2018 Dave Broadfoot Award for Outstanding Comedy Performance.

Written and performed by Colleen Brow | North Vancouver, BC

“Hits a chord with her humorous observations culled from the mundane landscape of North American life.” – North Shore Outlook Newspaper

“Who cares if she’s funny. Her house is a mess. She can’t cook.” – Colleen’s Mother. 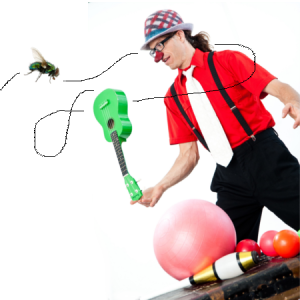 Have you ever been pestered by a fly?!…well, Clever Trever KNOWS you have!!

Watch Clever Trever perform amazing juggling with handmade clown props in this chuckle-some circus drama. It’s clown versus nature in an earnest struggle against gravity filled with belly laughs for you and your whole family.

Written and performed by Trevor Gear | Gabriola Island, BC

Buy Tickets at in advance for Buzz Off at EventBrite

Old-ish is about aging and death – only WAY funnier! Susan Freedman’s fifth one-woman comedy travels the rocky road from denial to grumpy acceptance of the last stage of life.

Written an performed by Susan Freedman | Parksville & Vancouver, BC

Buy Tickets at in advance for Old-ish at EventBrite

Fun Can Save The World! Following ten world tours, from Australia and Japan comes the ‘Most Original Comedy’ of the Edinburgh Fringe in an award-winning live cartoon adventure featuring hip tracks, happening flicks, and hilarious tricks that make a world of difference in a journey from destruction to true greatness.

Buy Tickets at in advance at EventBrite

Confessions of a Closet Time Traveller | Fly By Night Productions

Anthony had a childhood dream in which he saw himself twenty years in the future. Over time, as more events in this dream come true he realized he was a time traveller, but he never told anyone. Now, he’s coming out of the closet.

Written and performed by Anthony Hamilton | Victoria, BC

After the Beep | Pamela Bethel

Pamela found cassettes from the answering machine she had as a teenager in the 90s. Despite the obvious risk of death by embarrassment, she’s sharing this archive of adolescence. Part confessional, part show-and-tell, it’s an exploration of awkward times revealed by the original message recordings of BFs, BFFs, a frenemy and wrong numbers.

Written an performed by Pamela Bethel | Victoria, BC

Read reviews: Times Colonist and find out more After the Beep

“There’s much more going on behind the pop and bubble of youthful exuberance in After the Beep (though there’s plenty of that too)” -CFUV, Victoria

Buy Tickets at in advance for After the Beep at EventBrite 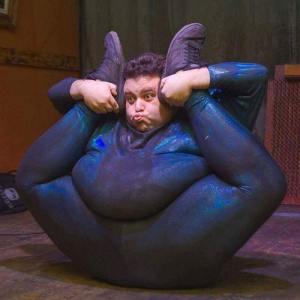 “the 5-star review” is a deep-fried platter of entertainment

THE FUNNEST FLEXIBILITY YOU WILL EVER SEE!

Robert J. Roberts has a huge problem with the world. In particular, he really dislikes people. All people. One day he becomes the unlikely custodian of a magical goldfish and Mr. Roberts’ misanthropic view of the world is seriously challenged. Can a person be frustrated into being a better human being?